What do you do when the elastic breaks on the shockmount of an AT4033 microphone?
That was question that formed in my mind this week when, at the end of a studio session, I discovered that the elastic in one of my AT shockmounts was rather “slack”. Closer inspection revealed that it had broken on one place and was worn and about to break in another.
I’ve used this shockmount for many years as it’s the one that came with my very first AT4033 – right back when I first started getting into voiceover work.
I quickly discovered on a variety of on-line forums that other AT users where quite rude about the AT shockmount and the elastic – but in all the years I’ve had mine (more than 15) it’s never broken before.
Which is why I didn’t know what to do. 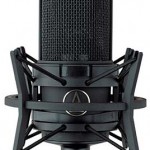 The particular shock mount in question is the AT8441 that came with the original AT4033 (it’s got 4 “legs” that stick up and down) – the current mic is the AT4033a and the current shockmount is the AT8449 (which has a metal “O” rather than the “legs”) – it looks different overall but the elasticated middle part of the mechanism that holds the mic is the same.
The trouble is a new shock mount is more than £70.

So I wondered about a DIY approach. There’s loads of ideas on different forums about how you could go to the pharmacy and get some scrunci hair ties, or maybe you could get quite fine elasticated cord from a ship’s supplier’s, or the rubber bands out of certain vacuum cleaners. Others suggest buying some document binders and somehow using the elasticated cords that hold them closed.

Many, many intriguing ideas…. and I was entertaining at least some of them because I was scared of the price or a new shockmount – and all because the elastic on my current one was gone.

In the end I did what I probably should have done in the first place and went onto the Audio Technica website – in fact I’d done a search on-line using “How do I repair my AT mic shockmount?” and found just the page. Not only was there a sequence of photos showing me how to re-thread the elastic but it also linked to the page on their webstore where I could buy the elastic.

In the end I fixed my AT4033 shockmount for less than a tenner and they sent the parts within 2 days. It took some time researching on the internet to sort it but it was worth the effort.

One tip though – if you do have to do this yourself – make sure you’ve got scissors handy to trim the cord because it frays every time you push it through a hole in the mount. If you don’t trim it then you can’t get it through the next hole!