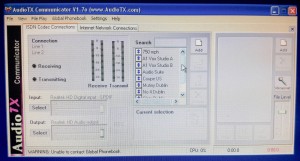 Dvoicebox had an ISDN line for remote recording sessions from 2004.  It was very useful for my own VO work plus for many years we benefitted from being the only studio near Stratford upon Avon with ISDN.

The result was that for quite a number of years the dVoiceBox studio saw a succession of actors based at the Royal Shakespeare Theatre in Stratford dropping in to do an ISDN voice over session linking up with a London studio for TV ads, radio ads and corporate narrations.  It was much more convenient than them having to travel down to London.

In the last couple of years before Covid  these sessions were becoming fewer in number as online services became more readily available and other studios located in Stratford were able to offer online instead of ISDN connections to London for thesps at the RST.

In 2021 – despite much more remote recording taking place during the pandemic I realised that the ISDN line was no longer paying for itself even with my own voice over work.  So I ended the contract and a short while ago we got set up with Source Connect.

It is well established and widely used throughout the industry. In addition for engineer and voice talent it operates in a way that is similar to traditional ISDN so feels familiar  and – even better – it costs rather less for better quality!

The quality over the internet should be fine but I do still take a safety recording for each session as I always did for ISDN (as it could be temperamental) – old habits die hard.