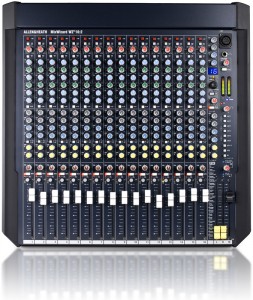 We’ve just taken delivery of a new mixing desk at dVoiceBox.  It’s not to replace our Soundcraft Ghost, which continues to do great service in the control room but is for our voice booth.  It’s a 16 Channel Allen and Health Mix Wizard 4 and we’ll be using it for self-op ISDN voiceover sessions in the booth. It will also be available for self-op recording sessions in the booth too.

In addition the new console will also be replacing our trusty but ancient Soundcraft Spirit Folio desk for dmusic PA duties or for event recording activities like the Love in Leamington poet and multi-performer event we recorded earlier this year.

There’s quite a lot to desks to choose from in the 12-16 channel mixer market and it’s fair to say that Allen and Heath aren’t the cheapest manufacturer for this size of desk. However what swung it for me was the superior build quality plus the overall spec for the WZ4 which includes on board effects.

In common with other Allen and Heath desks the MW4 features an individual circuit board dedicated to each channel and bolted to the main panel where others have one single circuit board for the whole desk – mounted parallel to the main panel.  I wanted a good quality desk that would be at home in the studio while rugged enough for live situations and the WZ4 seemed to fit the bill.

It’s installed in our booth and has already been successfully used for a couple of self op recording sessions. We’ve also road tested it with the dmusic PA at a recent Firedaze gig near Leamington. It proved to be easy to use with a clear board layout, long throw faders, plenty of gain on the channels, effective EQ, nice on-board reverb/fxs and enough auxes to feed rather more monitor mixes then we have monitors for!

Looks like it could be quite a dependable workhorse.