It is only relatively recently that I’ve started to get really interested in microphones. Not just the sound of them but how they look too. I think this post says quite a lot about me and microphones.  It was reported this week that Bradley Wiggins is making a cameo appearance in the long running radio 4 soap The Archers. 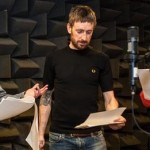 I discovered the story when I saw a photo on the BBC website.

I suspect many people would be drawn to the image of the famous Olympic gold medalist, maybe wondering when the side burns had morphed into a full beard.  But such thoughts were not for me – my first thought was “What kind of mic is that that they’re using there?”  I think it’s becoming an obsession.

Anyway I was particularly struck by this microphone as it was one I’d never seen before.

I’ve listened to the Archers off and on over the years and often wondered about the practical aspects of recording it but it’s only really recently that I’ve begun to wonder about the mics they use. 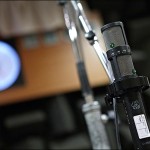 Further research threw up a photo by Edward Moss taken on a recent tour of The Archers’ studio in Birmingham that clearly reveals the actual mic to be an AKG C426 B.

It has been designed for stereo recordings and is a neat solution for coincident recordings where normally you’d put up 2 mics at a fixed point in either X/Y or Mid/Side configurations. It’s basically 2 mics in 1 and they both rotate in relation to each other so you can get the optimum angle for the recording – between 0 and 270 degrees. Each mic has a LED on it so you can see the angle of each at a glance.

I discovered that the C426B is an update on the original AKG C24 which also used the 2 mics in one set up and years ago was highly regarded by many studio engineers. 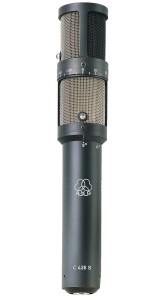 I gleaned from various forums that the C426 B is apparently great for drum overheads, piano, choirs, strings – and as we know the BBC deem it suitable for radio drama recording.

Sadly I’ll almost certainly not get to road test one. Firstly they are no longer in production and secondly they cost (and I could only find a US price) around 3000 dollars secondhand.

They look great though – really eye catchingly different – it would be great to put one up in the studio just to get the “what the hell is THAT!” reactions.

More than the appearance though I like the neatness and relative compactness of this solution to X/Y and mid/side recording.